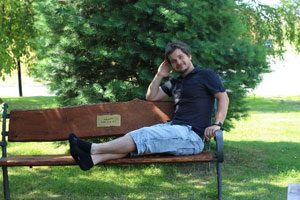 He has a passion for science, his two kids, sports, and carnivorous plants.

Ondra’s got first research experience in a yeast lab. However, he jumped into immunology afterwards. He got his PhD training at the IMG with Tomáš Brdička. In 2012, Ondřej joined the lab of Ed Palmer at the Department of Biomedicine in Basel, Switzerland as a postdoctoral fellow. In 2016, Ondřej established the lab of Adaptive Immunity at the IMG. The lab is connecting molecular biology and biochemistry with cellular immunology.

Research interests: To understand how T cells manage to fight infections and to stay self-tolerant. 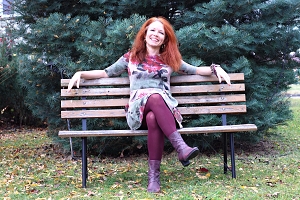 In her spare time, she runs, jumps and dances with or without her kids. She loves chocolate, coffee and aperol spritz and enjoyes design and creative work.

Maťa studied Biochemistry at Charles University here in Prague and enjoyed the first touch of science in the lab of Noemi Cerovska at IEB studying the plant viruses. In 2007, she joined the lab of David Staněk at IMG and got her PhD training in the field of mRNA splicing. In 2012, Martina moved for her postdoc to the lab of Anne Spang at Biozentrum in Basel, Switzerland to work on polarized protein trafficking in yeast. In 2016, she joined the lab of Ondřej Štěpánek at IMG, where she explores the function of the BBSome, protein trafficking machinery, in polarized cellular structures, such as primary cilia and immunological synapse. 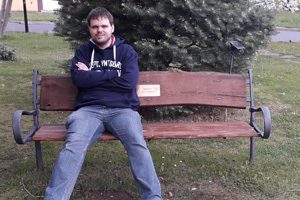 Juraj Michalik did his studies at the Institut National des Sciences Appliqués de Lyon, France. There, after two years of preparatory classes, he dwelled deeper into the realm of Bioinformatics, in which he did his master thesis. After working at Laboratory CRIStAL in Lille, France, for one and a half years, he followed his PhD at Ecole Polytechnique in Paris on the subject of Secondary structures of RNA. In May 2019, he became the member of the Laboratory of Adaptive Immunity led by Ondrej Stepanek. After studies at Biological faculty of South Bohemia in České Budějovice he moved to Prague and finished his PhD in Dominik Filipp’s lab at IMG. As postdoctoral fellow, he spent 6 years in Triantaffylos Chavakis lab in Dresden and from April 2019, he joined our team. 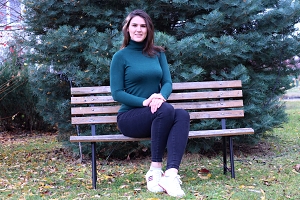 Olha did her Master’s Degree in Biochemistry at the Taras Shevchenko National University of Kyiv in Ukraine. Then, she moved to Prague to pursue a PhD, under the supervision of Dr. Martina Huranova at the Laboratory of Adaptive Immunity, IMG.

Šárka did her master degree at University of Chemical Technology in Prague, but worked at her diploma in the Lab of Adaptive Immunity of Dr. Štěpánek at IMG. Now, she is continuing for her PhD in Dr. Štěpánek´s lab. 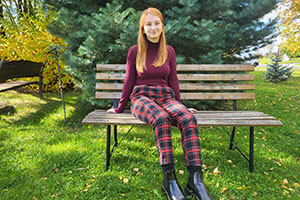 Passionate about nature, science and her dog. A big fantasy nerd.

Anička finished her master’s degree in Immunology at Charles University in Prague. She didn’t immediately embark on a PhD journey but worked in the HBV Cure group at IOCB, Prague. Then in 2022, she started her PhD project in the Laboratory of Adaptive Immunity focusing on the heterogeneity of tissue infiltrating T cells. 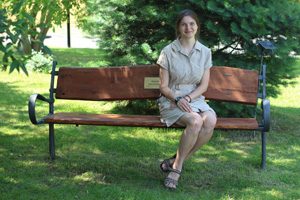 Apart from wet-lab and dry-lab work, she spends her time with people with intellectual disabilities or with scandinavian detective novels.

Verča did her master degree in Immunology at Charles University in Prague, being the second master to finish her thesis in the Laboratory of Adaptive Immunity. Now, she switched her topic from researching Bardet-Biedl syndrome to explorations of the T-cell variability using single cell RNA sequencing.

Research interests: new T-cell subpopulations (both real and non-existing ones). 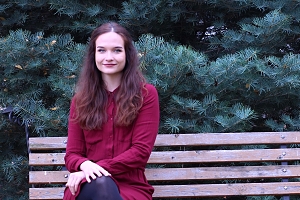 Bookworm, coffee-addict, contemporary and pole dance enthusiast who enjoys weird movies, video games, traveling and is a personal slave to her cat.

Darina did her Master´s Degree in Biotechnology at the Comenius University in Bratislava, working on the development of lectin biosensors for the diagnostics of rheumatoid arthritis under the supervision of Dr. Tomáš Bertók from the Institute of Chemistry of the SAS. Then, she moved to Prague to pursue a PhD, and is now focused on the project dealing with the diversity of CD8+ T-cells under the supervision of Dr. Štěpánek. 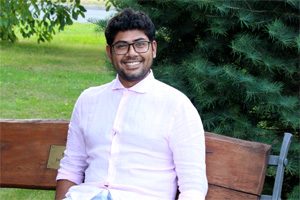 Avishek did his Masters in Molecular Biology from the University of Hertfordshire, UK. His Master’s thesis was on the overall expression profile of Suppressors of Cytokine Signaling (SOCS) proteins when induced with signature cytokines. Following this, he moved Prague to pursue his PhD under the supervision of Dr. Huranova at the Laboratory of Adaptive Immunity, IMG. 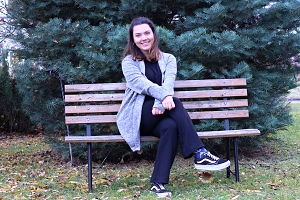 Dreamer with book always prepared in her pocket. She also enjoys writing letters in the old way, sports, music, painting or traveling with her finger on the map.

Eva did her master degree in Genetics at the Comenius university in Bratislava, where she worked on her diploma thesis in genotoxicological field. Then, she moved to Prague and started her doctoral studies in the Laboratory of Adaptive Immunity focusing on memory CD8+ T cells under the supervision of Dr. Štěpánek. Passionate about science, always enthusiastic about conferences and wet lab experiments. Beyond the lab, she enjoys travelling, dessert cooking and all kinds of arts and crafts.

Oksana completed her master degree in Genetics in Karazin Kharkiv National University in Ukraine. Since 2017 she has been working on her PhD project at the Lab of Adaptive Immunity under the supervision of Dr. Ondřej Štěpánek. 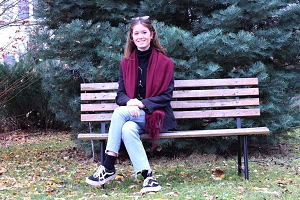 Since I like warm countries, I’ve chosen the Czech Republic for my Ph.D.! I enjoy cooking in my free time, but please, don’t ask me for a pineapple pizza.

Valeria finished her master degree in Biotechnology of the Drugs at Federico II University of Naples in Italy. In 2021, she started her PhD at the Lab of Adaptive Immunity under the supervision of Dr. Ondřej Štěpánek. Her main interests lie in immunology and she is studying the role of Lck in peripheral CD4 and CD8 T cells. 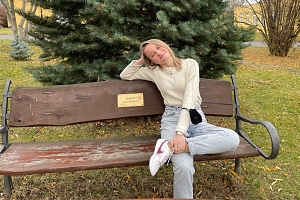 I was born in Belarus, finished school in Russia and then moved by myself to Czech Republic. I am now a 3rd year Bachelor student in Charles university and I joined this lab because I really wanted to gain both theoretical and practical experiences in immunology and they gave me the perfect opportunity to do so. 🙂 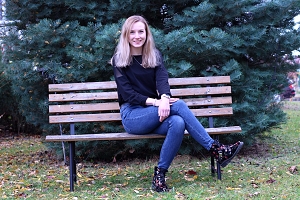 A perfectionist, who enjoys a good coffee and relaxes with baking. Apart from science, she is into anthropology and sports.

Miška joined the lab as a 2nd year bachelor student of Biology at the Charles University. She was interested in immunology and chose the Lab of Adaptive Immunity as a place where she wanted to gain experience and learn new stuff. After she successfully completed her bachelor degree, she decided to continue with her MS degree in the lab. Her project is focusing on the signaling kinase Lck. 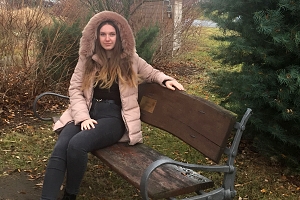 Veronika did her bachelor’s degree in Biological and Chemical Sciences partially at the Erhvervsakademi Aarhus, Denmark and at the Coventry University, UK. Currently, she is attending a master’s degree program (Immunology) at Charles University in Prague. Therefore, she joined the lab of adaptive immunity as a master student to carry out the master thesis project and to acquire broader knowledge about the Immunology research. Kristýna is a 3rd year bachelor student of Biology at the Charles University, Faculty of Science. She is interested in cell biology and immunology, and she would like to learn new stuff and methods in our lab. 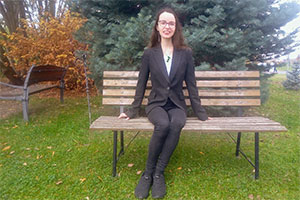 Alexandre Dumas’s fan who enjoys cooking and painting in her free time. If you catch her picking up flowers at your flower bed, forgive her, she makes a herbarium and just can’t help.

Regine studies Biology at Charles University. She joined the team as a 1st-year bachelor’s student as she has always been into immunology. One day she would like to specialize in onco-immunology or autoimmunity. But currently, more focuses on understanding how the lab itself works without making anything explode – especially her colleagues’ nerves. 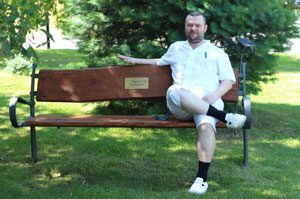 1997-2001 Láďa tried to study Biology and Geography at Charles University in Prague, but finished bachelor degree of education at Institute of Chemical Technology in Prague in 2013, main field of study: Biochemistry and Biotechnology. At IMG working from 2006, Laboratory of Adaptive Immunity joined at 2016.